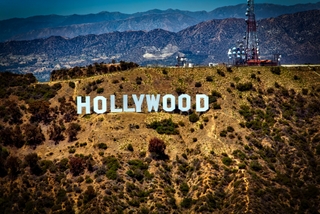 Los Angeles became the Land of Hollywood when film production began there early in the 1900s after moving from other parts of the country.  Los Angeles, the land of natural sunshine, was the perfect place for film production due to its more than adequate ability to expose film.  Also many movie producers at that time were escaping from the Edison’s Motion Picture Patents Company, which controlled almost all of the movie production patents at the time.  (Some interesting movie trivia.)

I was lucky to have been born in Los Angeles, where the Land Of Hollywood took a quite a memorable part in my life.  My grandmother was the first one in the family to participate in the motion picture industry.  Although she never explained to me how she got started, I am sure it was due to her friendship with a lady she use to play mah-jongg with that was an agent for Asian-American actors.  Grandma also took my mom with her to work in the film industry.  Mom only remembered working in the 1936 movie The Stowaway with Shirley Temple (when Ms. Temple played a Chinese orphan) and the 1937 movie The Good Earth, based on the Pearl Buck book on the lives of Chinese Farmers.  Working in the movies didn’t really phase my mom; she only boasted that she “played with Shirley Temple.”  Mom stopped working in films when she entered junior high school…school was much more important.  Grandma’s last known project was the television show, Love American Style, where she satirically played the wife of a Chinese Herb Specialist, who sold love potions.  To be honest, it was a joke on my grandmother, but fortunately she didn’t understand the comedy.

My sister and I started our ‘movie careers’ with the filming of the 1960 Mountain Road with James Stewart and Henry Morgan (playing World War II American forces in China trying to prevent the advancement of the Japanese).  My mom had brought us along with my cousin to take Grandma to the Burbank film studio to work.   When the director spotted us (I was about 8 at the time), he told my Mom he wanted us all to be in the film but had to get a work permits from the Board of Education of the LA Unified School District downtown before we work.  We flew down to the Board for the permits.  Upon our return, we were outfitted in Chinese peasant clothes and began “playing” at being villagers.  That part was fun, but when they applied our makeup (which looked like dirt) on our faces, arms, legs and clothing, it was beginning to feel strange.  And then to top it all off, we had to pretend we liked the cold rice they were feeding us, the fun ended.  Fortunately, we survived that first job and from there we worked whenever we could as basically called “extras.”

Asian-American actor James Hong is also a voice actor, producer, and director of Chinese descent.  I first worked with James Hong in 1960 on the Checkmate TV Series.  Since then we worked together in the 1961 Flower Drum Song movie.  He is one of leading Chinese American actors in over 500 movies and TV shows.  His latest contribution is in the Kung Fu Panda film series as the voice of Mr. Ping, the father of Kung Fu Panda.  On a personal connection, James Hong married my cousin Susan and their daughter April has followed her father into the film industry and has taken acting and voice acting roles.  I hadn’t seen Susan since we were young, but after a family dinner where we both attended, she sent me an autographed photo of Mr. Ping, when she learned that Kung Fu Panda films are my favorite movies.

My whole family was involved, from Grandma, Mom, my sister, to my Dad, in the 1961 movie Flower Drum Song.   Grandma’s brother and wife were also in the film as the characters on the San Francisco’s Chinese New Year’s float and my uncle also  played as a long shoreman in the beginning of the movie when two of the movie main characters arrived as stowaways from China.  We worked over a week’s blast of filming street, park and parade scenes.  We did attend ‘school on the set,’ which were actually completing supervised homework assignments that we brought from our teachers.  The food catering at lunch was absolutely delicious!!  We didn’t understand how filming went, but it was fun to pretend.  I will admit that I missed my chance at “stardom,” when I was asked me to be one of the dancers in the front of the New Year’s Parade and being bashful at that age (I hadn’t developed my Dragon/Leo strengths yet), I declined the opportunity so I missed out on that score.  But whenever I watch the movie, I again think about lost opportunities….just who am I kidding??  Although we didn’t wander around Universal Studios, stars from neighboring sound stages would drop by to visit.  We met Tony Dow from Leave it to Beaver, remember him (Beaver’s Brother)??

My first work assignment alone was in 1961 with the movie, A Majority of One with Rosalind Russell and Sir Alec Guinness.  My scenes were built in a sound stage that looked like an ocean liner that Ms. Russell was traveling to Japan on and where she meets Mr. Guinness.  I played a young Japanese traveler with my mother taking part in the fire drill and swimming in the swimming pool.  This movie holds a special place for me since Ms. Russell and Mr. Guinness seemed to favor me over the others and always had me come sit with them after lunch.  I never understood what they were all saying, but just to say I sat on all of their laps including the other actors, adds to my fond memories since they were such great actors.  How many people can say that they sat on the lap of Obi-Wan Kenobi??  Me, and very proudly!!  With that movie, being ‘star-struck’ also went into high gear.  Fortunately, our sound stage at Warner Bros. was right in front of the commissary (cafeteria) where all the stars went to.  And around the age of 10, I figured out where the fan mail department where there was pre-printed show postcards that were sent out to fans.  I managed to accumulate a full set of postcards and then had the stars autograph them either before or after their meals!!

It was a natural for me and my sister to be Korean orphans for the 1962 TV show  Ensign O’Toole.  The first K-Pop group, the Kim Sisters, played orphanage caretakers of a Korean orphanage that were adopted by the men on the USS Appley.  On the episode we were shown at the orphanage and onboard at an ice cream party.  I  remembered they took so many takes that the ice cream melted and was replaced with mash potatoes, which is difficult to pretend it was ice cream.  If you are interested in seeing the episode, you can watch it on YouTube:  https://youtu.be/WPAX_DqQVoA  Try and guess which orphan is me.  One of the recurring roles was Beau Bridges, who during high school attended a game at my high school and I was able to sit next to him.  We talked about the show and he actually remembered that episode with all the orphans.

I have always enjoyed my movie assignments when I got them, but when I worked on the 1963 movie The Ugly American (with Marlon Brando) this was especially memorable.  Sorry, Mr. Brando, the movie itself was not interesting and again I played a villager from a Southeast Asian country.  But we were on the backlot of Universal Studios before they changed it into a tour, so it was open and not restricted.  Another boy was an extra and we went out on the lot after lunch.  I’m sorry I didn’t have a camera with me, because all that I saw those days were amazing!!  We saw a full castle with turrets and a drawbridge, a New York City street and a little European street.  I learn about the fake sets because we went into some of the stores on those streets and there was nothing inside!!  We walked by the McHale’s Navy ship sitting in a lake.  Then we came across something wonderful – Alfred Hitchcock filming what was soon to be The Birds, the exploding gas station scene.  And then they were filming Bye Bye Birdie in front of the City Hall and we could see the whole set while standing on a hill.  We came back the next day and this time armed ourselves with our autograph books, so I got one from Alfred Hitchcock!!  What a memory!!

When I was required to join the Screen Actors Guild, the actors labor union, my parents decided to end my “film career.”  It was more important to get a full education.  Besides, attending school on the set was not sufficient for a real good education.  But I got a good taste of the life in working in the movies that not everyone could receive and for that I am grateful.

I connected to the Land of Hollywood in another way years later.  My sister started working for a Beverly Hills pediatrician, and she began babysitting for Patty Duke (Parents Trap and Patty Duke Show)  and John Astin (Addams Family TV series).  They had five rambucious boys and my sister couldn’t handle them all, so I was asked to help.  It was quite amusing to see John interact with his kids.  I remember one day at breakfast, we were all eating at the table, when Sean Astin put a mask on his Dad.  John just acted as if nothing happened, but believe me, it was odd to sit with a grown man with a mask on, talking normally and trying to eat breakfast through the mask.  Later the next year we were invited to their New Year’s Party  and met with some of their neighbors, who happened to be Leonard Nimoy (Star Trek) and Carroll O’Connor (All in the Family).  I was pleased when Mr. Nimoy remembered me a couple of years later when I attended one of his Broadway plays and he invited me backstage for a visit.  I certainly made points with one of my classmates who was with me and from Kentucky and had never met a ‘star’ before!

Many, many years later, when the real estate boom bottomed out which also affected the construction industry I was working in, I turned my accounting career from construction to production companies.  Basically they produced commercials, so getting to know the directors, it was easy for me to have casual audition for side parts on the commercials.  I was able to sing for a Kia Rio commercial and got a small role in an ESPN commercial.  All in all, it was pretty neat to “pretend” again, along with the ability to see the various celebrities starring in the commercials.  But I also worked for RSA & Associates, doing commercials production and Scott-Free, film production and both owned by Director Ridley Scott.  Filming of course was not done in the building, but all the planning meetings and wardrobe fittings were held in our offices and we had the ability to also see the celebrities in the movies being film.  It is not every day that you go down the hall and turn the corner, only to run straight into Denzel Washington in the hallway!!  Or exit the building only to see Sylvester Stallone on the sidewalk, or Samuel Jackson in the lobby.  I guess I will never get over being ‘star-struck.’

Yes, I was never destined to be a “Star.”  But as you can see, I did have a strong connection to the film industry for it to be one of the high points of my life where I could share it with you today and hope you enjoyed the memories.